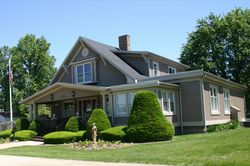 Neal’s Funeral Home is approximately 87 years old. It was founded in the mid 1920’s by Ray Williams who built the building on the foundation of an old creamery belonging to Gotlib Herman that burned. Williams and his partner operated the business as Williams & Brown Funeral Home.

Later Dennis Nead joined the staff of the funeral home. The name was changed in January 1977 to Fallis & Nead. The name remained the same until January 1981 when Dennis Nead’s son-in-law became a member. The name then changed to Fallis & Nead & Clark. In 1982, James Fallis’s name was removed from the name of the home and it became Nead & Clark. The Nead’s sold the business on December 31, 1987 to Bill and Lila Neal. Finally in 1994 the name was changed to Neal’s Funeral Home.

A year of daily grief support

Our support in your time of need does not end after the funeral services.  Enter your email below to receive a grief support message from us each day for a year.  You can unsubscribe at any time.